Hawaiians take action to wrest back sovereign control from USA 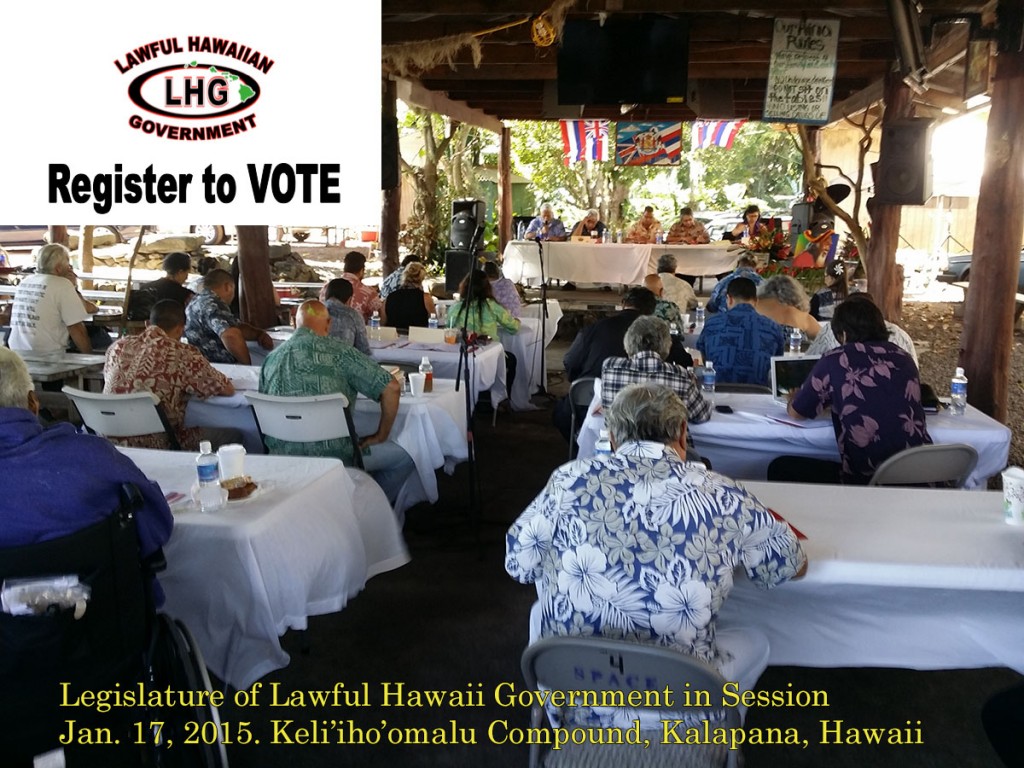 [Extract from Examiner.com] In an extraordinary act of political defiance to US sovereign control over the Hawaiian Islands, Hawaiian nationals held a legislative convention from Jan. 16-18 to enact laws for a restored Hawaii Kingdom. Among the legal issues tackled by the convention was land reforms to prevent U.S. courts from displacing native Hawaiians whose entitlement to land dates back to the overthrown Kingdom. Big Island Video News covered the land titles issue with a Jan 18 video of a keynote address at the convention. Among the sovereignty groups aiming to reinstate the overthrown Hawaii Kingdom, the Lawful Hawaiian Government (LHG) is unique insofar as it has a functioning legislature that is elected every four years. The LHG cannot be simply dismissed as a group of self-appointed native Hawaiians to high office claiming to restore a Kingdom overthrown more than 120 years ago. The process witnessed by this reporter, is more accurately described as a restored Hawaii Kingdom government led by an executive cabinet guided by an elected legislature that is leading a nonviolent resistance to occupation by a foreign power – the USA.

The legislative convention– called “Mana Kau Kanawai” in Hawaiian – has met 40 times since its formation in 1999. The legislature comprises a House of Representatives and a House of Nobles which respectively has up to 24 members (currently five positions in the House of Representatives are unfilled). Twenty-eight legislators along with four cabinet ministers met for the legislative convention, most had flown in from other islands to Kalapana on the Big Island of Hawaii.

Gary Hoffeld, the LHG coordinator for the Big Island, submitted two documents concerning the creation of a Hawaii Star Visitor Sanctuary that a group of Big Island legislators had in 2014 adopted in response to an earlier proposal made at the Jan. 2014 legislative convention in Maui.

After the Speaker of the House (Kekane Pa) concluded the legislative session around 4 pm, it was hard not to be impressed with the significance of what had been achieved. In spite of an illegal takeover and occupation by US forces that began in 1893 – which the US Congress belatedly admitted in its 1993 Apology Resolution – Hawaiian nationals are taking action. They are doing so through the restoration of a legislature and government that is duly elected. The fact that the LHG is conducting itself nonviolently – through love and aloha – is a remarkable aspect of a movement that has lasted for over a century. The upcoming Sept 12 elections for the Lawful Hawaiian Government is likely to be a significant milestone for Hawaiian nationals taking action to overturn an historic injustice, and restoring their overthrown kingdom through peaceful means.